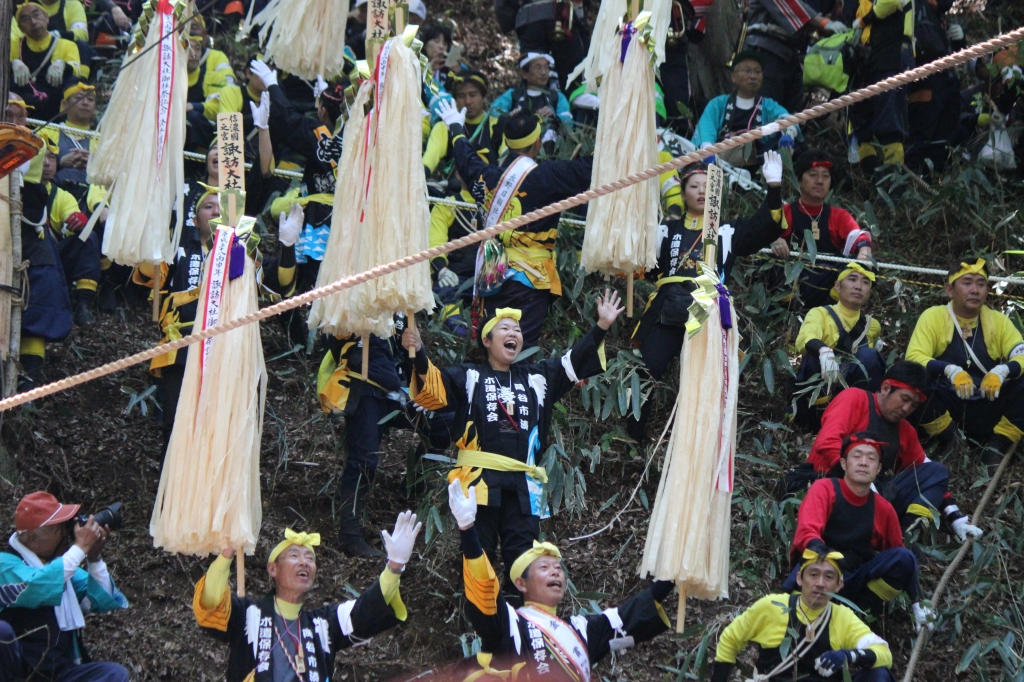 The text below is from a speech by the kiyari maestro Akiko Tamura (pictured above).  The videos following each section present examples of the different kinds of kiyari.

For Kiyari we sing a special kind of song in a high tone, to set the timing for everyone to pull the Onbashira.  Kiyari plays other important parts, too, like inviting the mountain gods to Onbashira and also sending them back home.

Kiyari has two kinds of songs. One is “Shinji no Kiyari”.  As I just said Kiyari sings to invite the gods from the mountains.

The other kind of Kiyari song is a signal for participants to pull the pillars. Compared with “Shinji no Kiyari”, working kiyari is really high pitched and short. The song’s lyrics change depending on the situation.  Sometimes we encourage people, sometimes we pray for their safety. Things like this.

Kiyari is for the people who participate in this festival to make their hearts as one, but only listening Kiyari isn’t very useful. After Kiyari, you see people responding with “Yoisa” three times, pushing their hands in the air. That is the most important point, saying “Yoisa” together, making all people’s hearts be one. 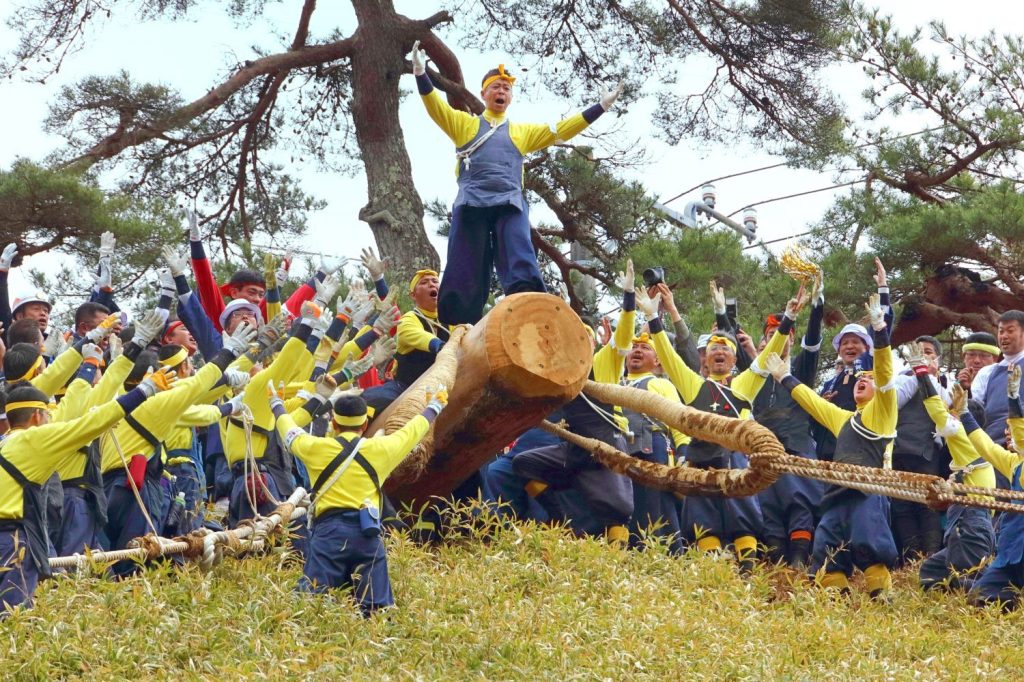 On April 8th, Minato’s Harumiya 4 pillar had their Yamadashi, the first part of the Onbashira festival. From the start at Tanakoba far up the Higashi-mata Valley to the end point at Shimekake, it was a raucous and energetic day. Kiotoshi, the pillar riding ceremony, was one for the ages.  Shoichi Ajisawa was at the Hananori position at the front of the pillar (pictured above). Once again this year Kiotoshi was smooth and incident free.

The first video covers Yamadashi up through Kiotoshi. The fall is at 7:00, but the false starts before are an interesting part of the process. The view is from the top of the slope.

Next, the moment that started off Kiotoshi—the Yoki-tori, Hidetomo Yamazaki, cutting the rope to send the pillar on its way. From 7:30

And finally, a unique view of Kiotoshi from the bottom of the hill…and a close call! 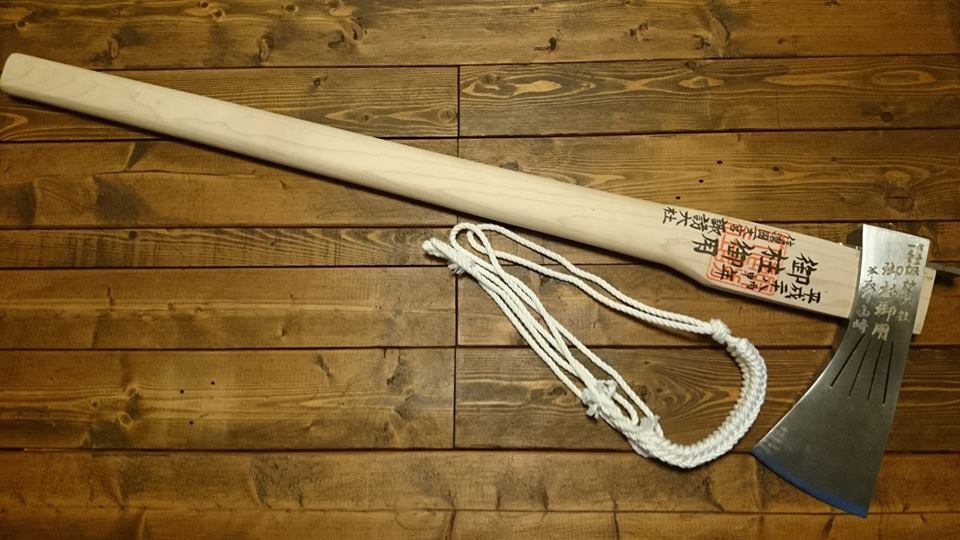 The Yoki-tori (斧取り) has a unique and important role in Onbashira. He uses a ceremonial ax to cut the rope that holds the hashira suspended over the edge of the log riding slope (kiotoshi–zaka). When the blade slices through the air, severing the rope, the pillar falls. There’s enormous pressure to cut it cleanly in one go. This year’s Yoki-tori for the Harumiya 4 pillar is Hidetomo Yamazaki. When asked what he’s most looking forward to during the festival, he said, “Connecting with everyone and concentrating on cutting the rope!” The short video of his recent practice below shows he’s off to a good start! 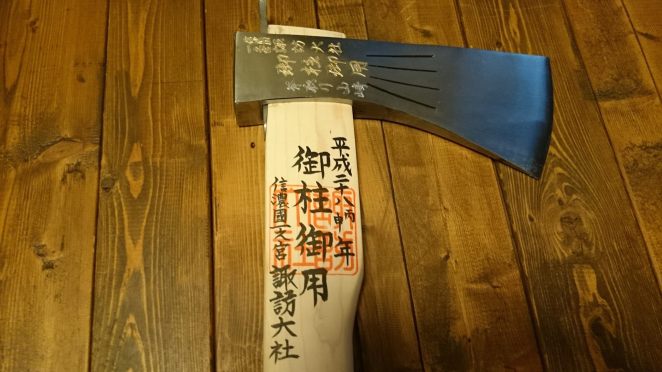 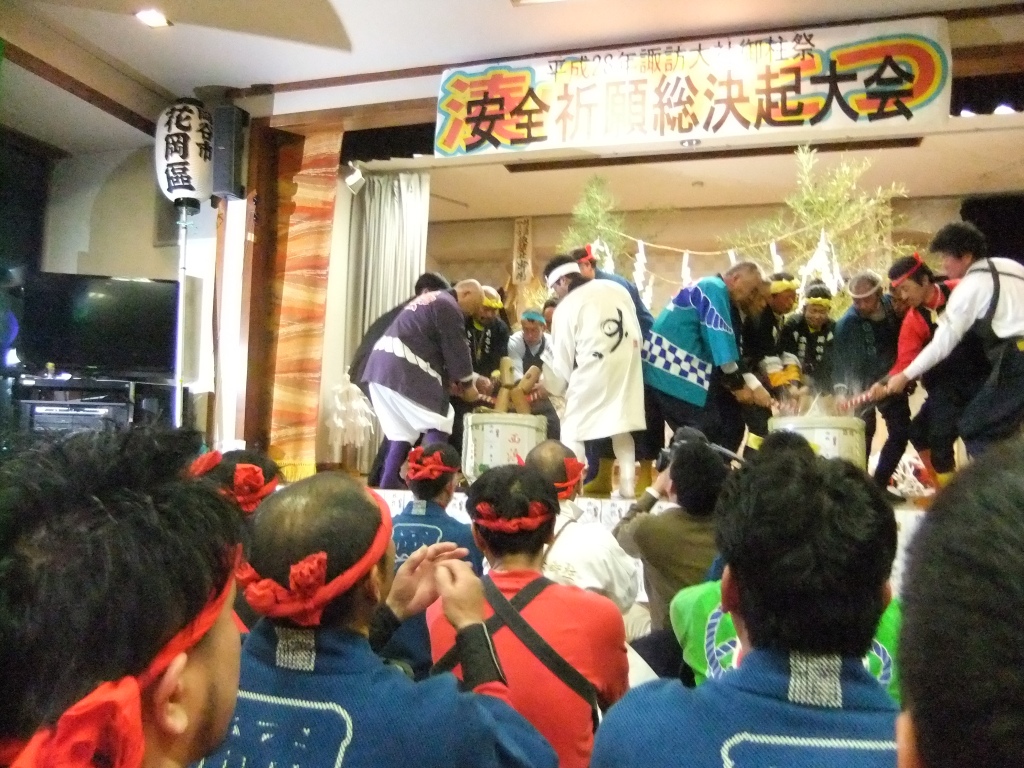 The last gathering before Yamadashi, held at the community center in Minato. Roughly 300 parishioners attended. 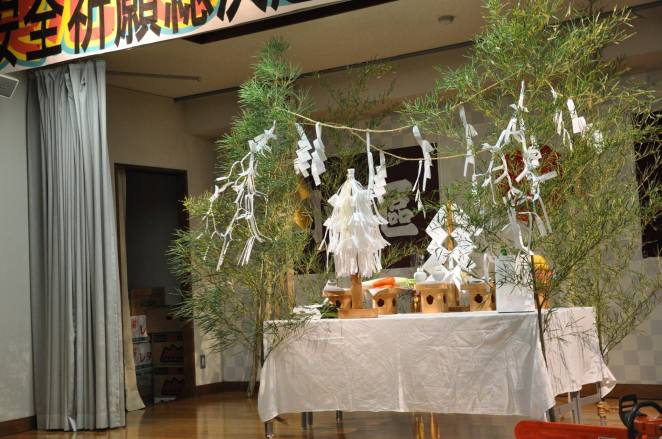 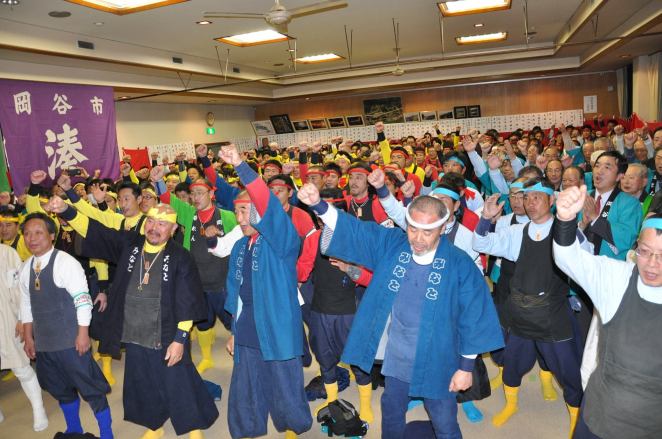 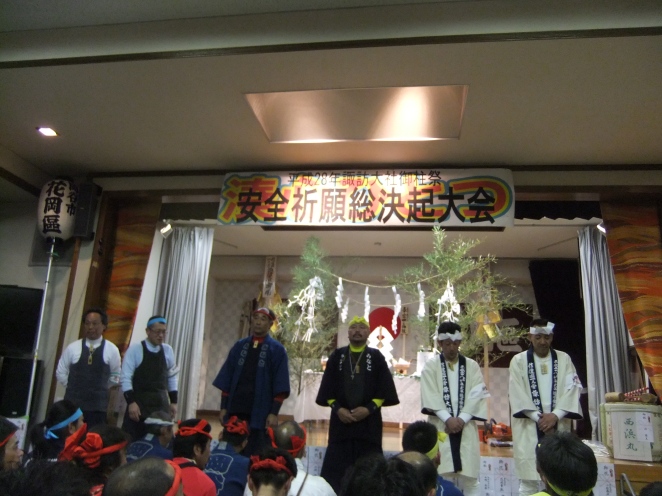 Heads of the different teams. Left to Right: Kizukuri, Oikake-zuna, Teko, Motozuna. The last two in white are this year’s O-gohei 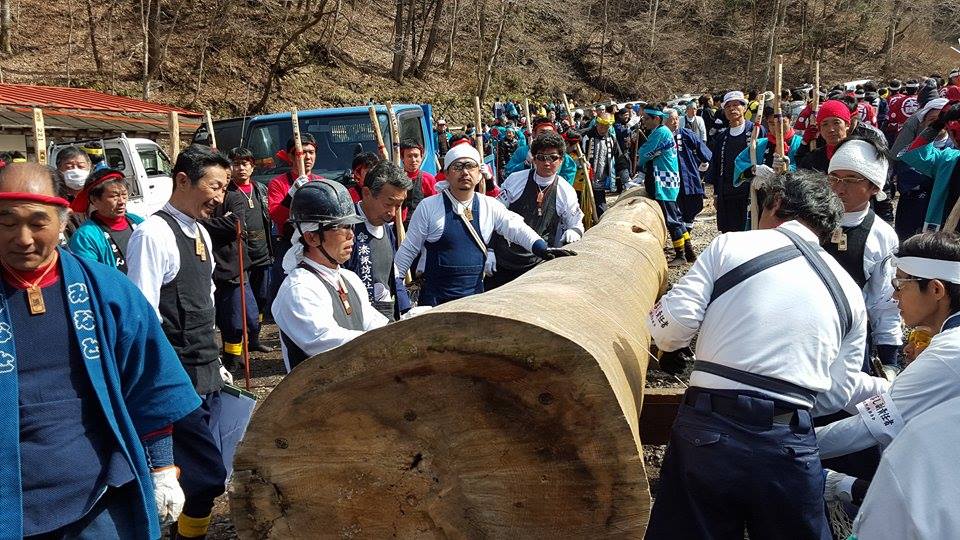 A few weeks before Shimosha’s Onbashira, the unjiko (parishioners) perform an important undertaking called Kizukuri. This is where they make the final preparations to the pillar before Yamadashi. The work is managed by the Kizukuri-shu. They cut the logs so that the harnesses and ropes can be attached and otherwise get the hashira roadworthy. Following that, the Motozuna-shu attaches the harnesses in a job known as wana-guri.

Image above and other 2016 photos courtesy of Akiko Tamura 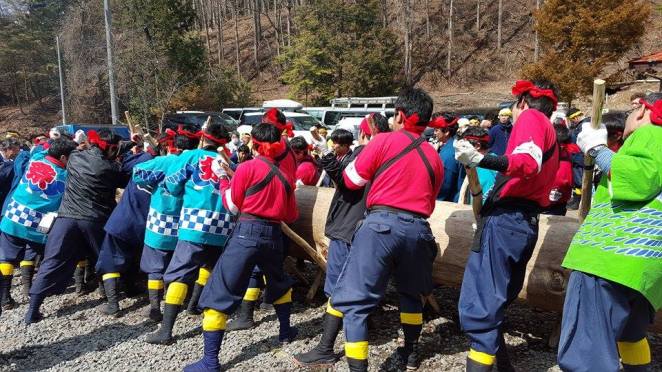 Moving the hashira into position 2016 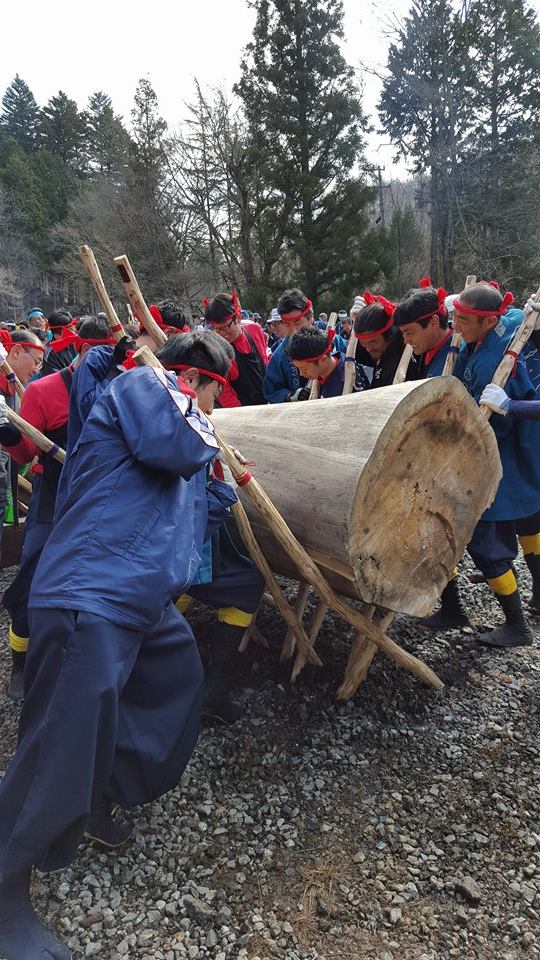 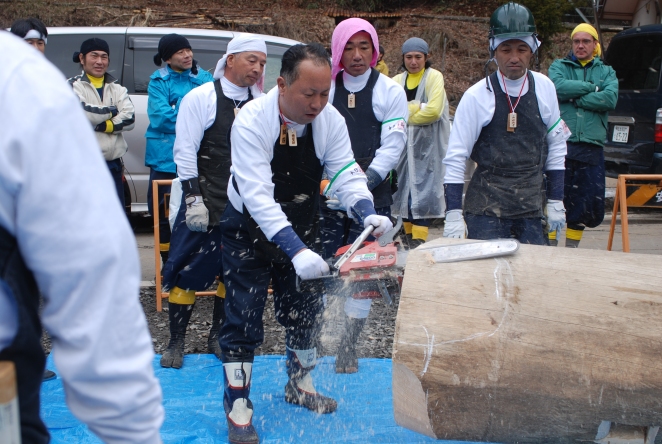 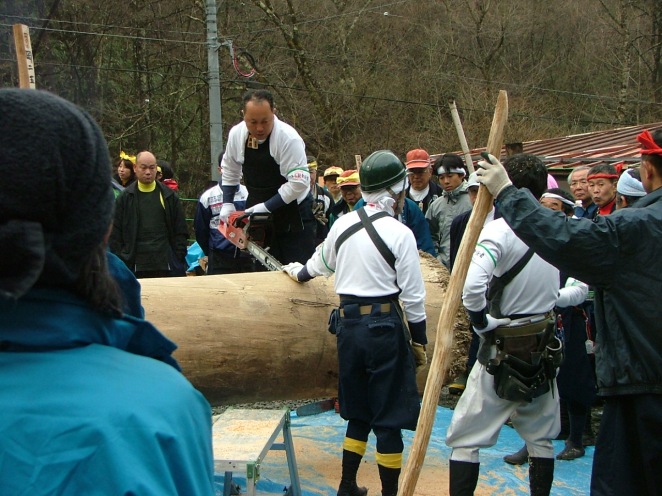 Cutting the holes the harnesses slide through, 2010 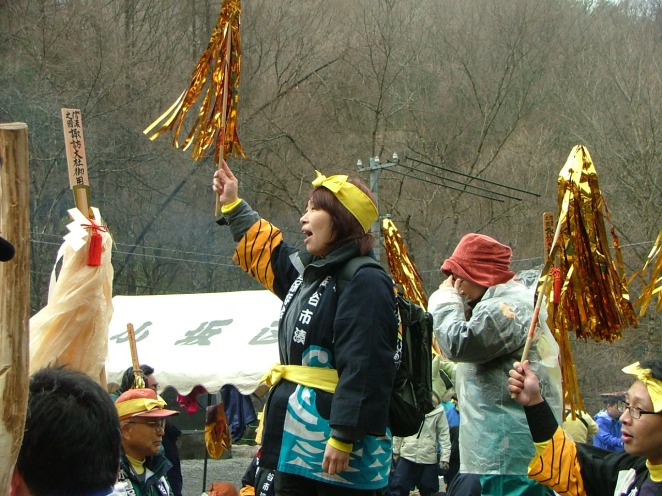 The following wanagiri shots are from just before Satobiki 2010. Included here to show the harness making process. 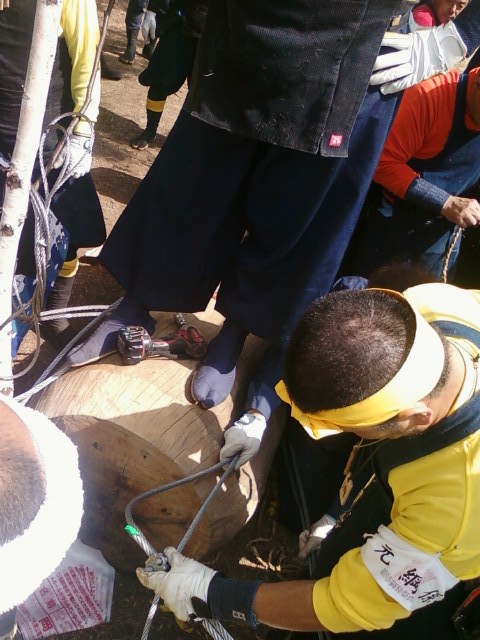 Wrapping the harness with burlap, 2010 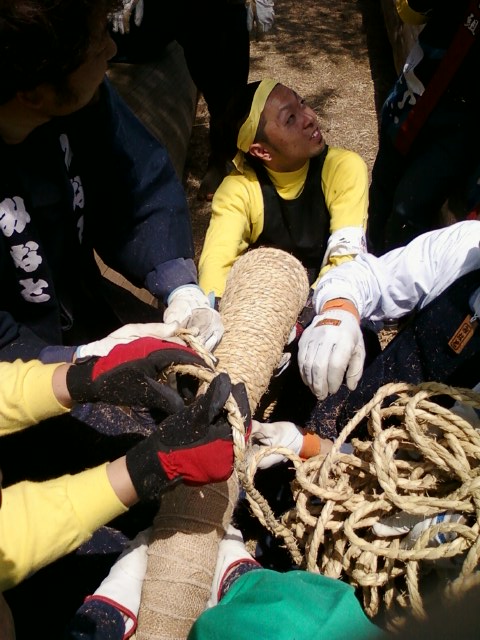 And then rice straw rope 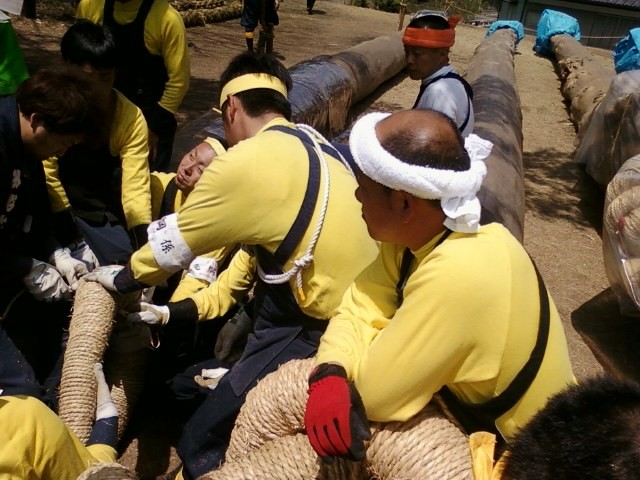 Leaving the pillars with two fat harnesses for the two pulling ropes.