Events: The Flow of Onbashira

Like all parts of Onbashira, choosing which trees will become the pillars takes time. After the final events in November of the main Onbashira years, there is a short lull before  the process of selecting the enormous fir trees (momi). This starts four years before the festival with Kari-kari-mitate (most recently in 2018), followed the next year by Kari-mitate (2019), and finally Hon-mitate (2020).  The various mitates roughly translate as the “very tentative selection,” the “tentative selection,” and the “final selection.” The trees are chosen by priests from the shrines and professional forestry workers, and are chosen according to their age, size, ease of access (for cutting), and straightness. For Shimosuwa they are taken from a forest in the mountains above the Shimosuwa shrines. For Kamisha, they formerly were harvested from the Yatsugatake range across the valley from the shrines, but are now brought from further afield.  There is much discussion these days about how it’s becoming increasingly difficult to find trees the proper size.

This is the ceremony / working event where they cut down the selected trees destined to become the hashira. It takes place in May the year before Onbashira for Shimosha, and the month before the festival for Kamisha. Photos and Video by Fumiaki Aruga. 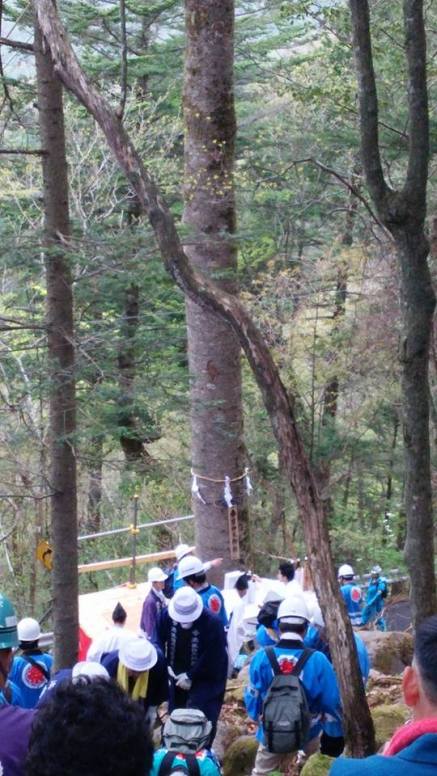 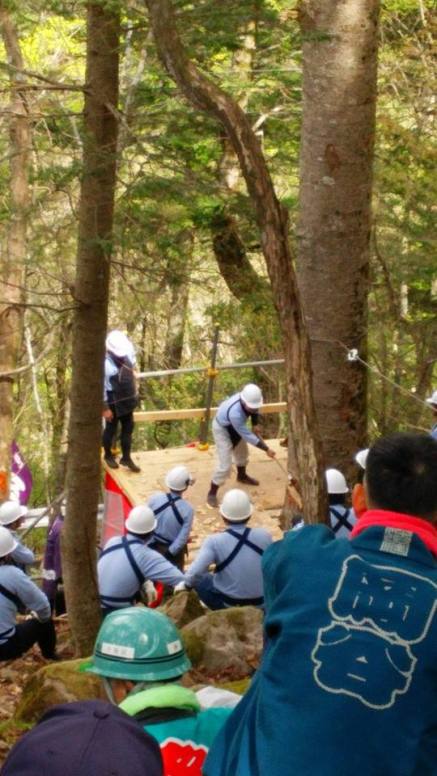 Moving the Pillars to the Starting Point

In days gone by this also was all done by hand. These days the pillars are moved by professional logging companies to the official starting points some time before the festival. These same companies also minimally process the fallen trees, transforming them into the pillars that will join the festival. While not an official Onbashira event, it is an essential part of the process (as can be seen in the photo with the hashira being blessed).  Photos by Emi Yamazaki 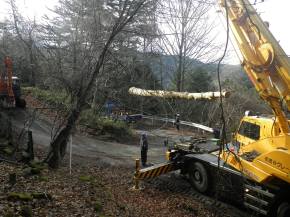 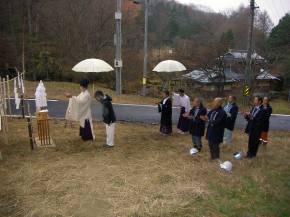 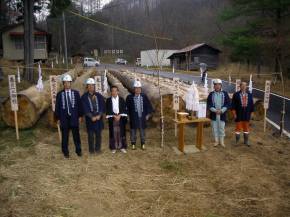 This traditional process of making the thick rice-straw ropes that parishioners use to pull the hashira is no longer universally done. Depending on the pillar, time and resource limitations have led to the introduction of pre-fabricated ropes. Where it is still conducted, it’s a sure sign that Onbashira is approaching. It also holds enormous symbolic connotations, as the community members work together to wind the single, thick rope from many strands.

Tsuna-uchi starts about 1 minute in:

This is when the parishioners make the final preparations to the pillar before Onbashira begins. The work is managed by the Kizukuri-shu. They cut the logs so that the harnesses and ropes can be attached and otherwise get the hashira roadworthy. Following that, the Motozuna-shu attaches the harnesses in a job known as wana-guri.

The main events of the Onbashira Festival take place over two full weekends a month apart in early April and May. Yamadashi, literally “leaving the mountains,” kicks off the party with a long procession towards town.

For Shimosha, over the course of the weekend, eight pillars are pulled by hand from Tanakoba, the staging area in the mountains, to Shimekake.  This is a 4.6 km haul. They remain at Shimekake until the parishioners bring them down to the shrines a month later during the Satobiki portion of the festival.  Along the way during Yamadashi they reach the Kiotoshizaka , the slope where the renowned log riding takes place. 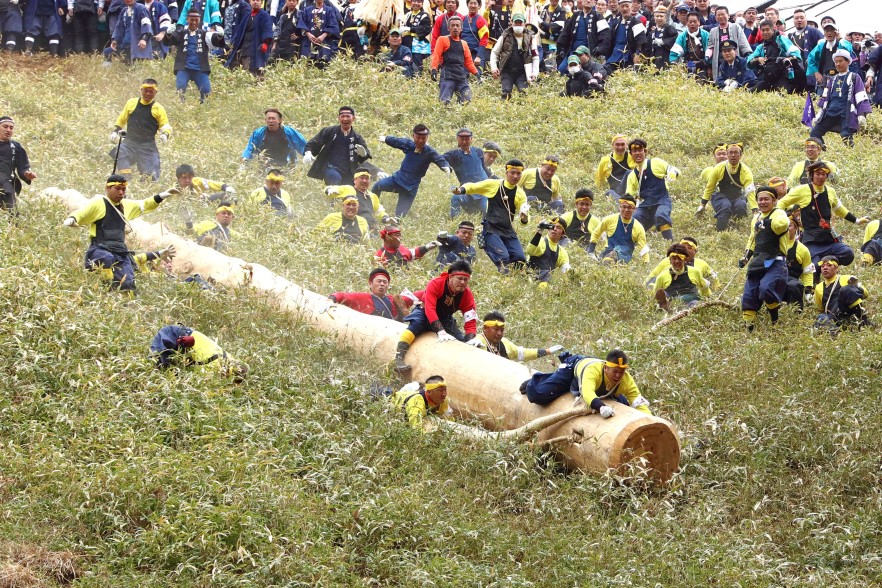 Kamisha’s Yamadashi involves an even longer haul toward town. Along the way they encounter a steep slope and slide down in their own colorful kiotoshi ceremony. While not quite the daredevil spectacle of its Shimosuwa counterpart, it’s a Yamadashi highlight none-the-less. Crossing the Miya River, known as Kawagoshi, takes place shortly after kiotoshi  and is another action packed part of the festival. From there the pillars are brought a short distance to Onbshira-yashiki where they remain enshrined until parishioners pull them to their final destinations during Satobiki in May. 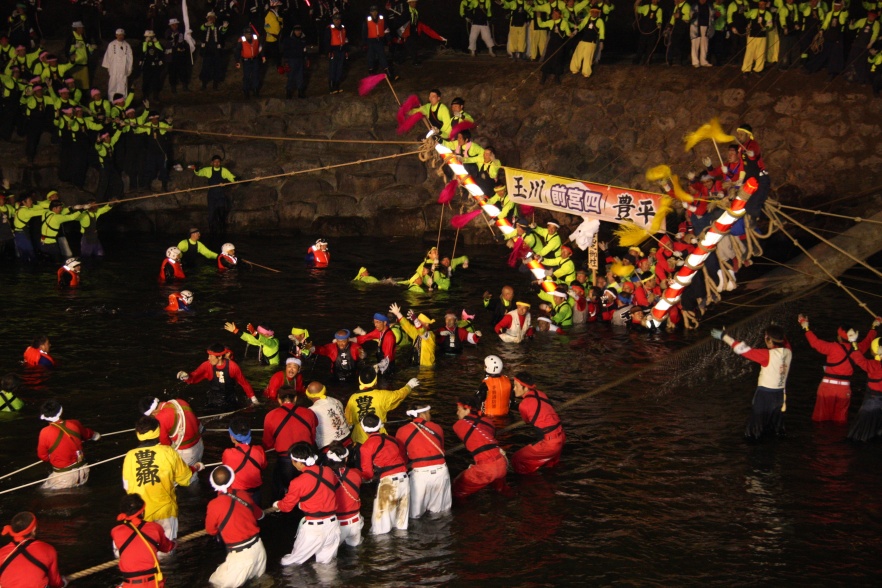 Literally “pulling to town,” the procession to the shrines marks the pinnacle of the festival.  One by one the pillars leave their resting places in a continuous procession toward their final destinations– four to Honmiya in Kamisuwa and four to Maemiya just down the road in Chino, and in Shimosuwa four each to Akimiya and Harumiya. The pillars are preceded by a jubilant procession of dancers and portable shrines. Kiyrari singing rings out all around, and crowds of parishioners and onlookers throng the hashira as they move through the streets. 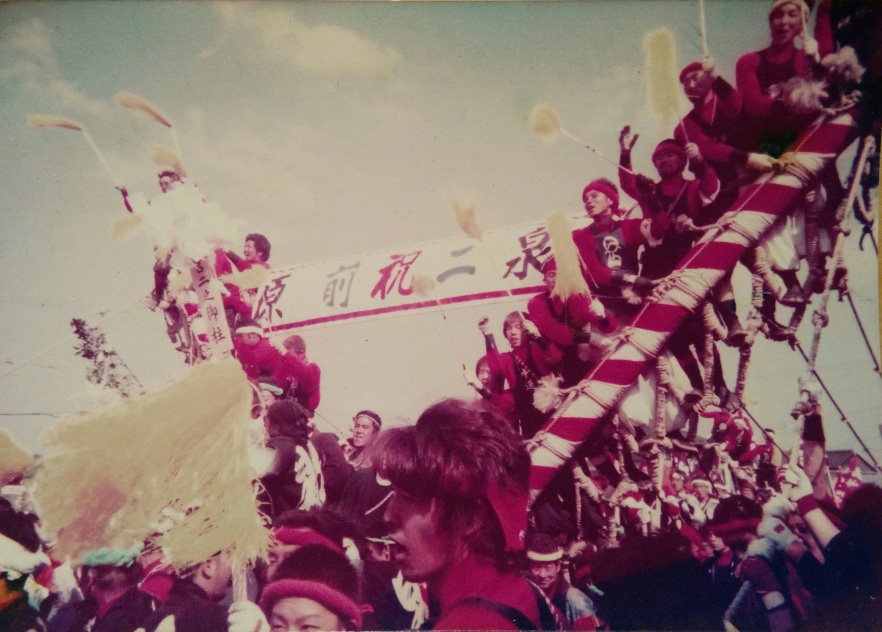 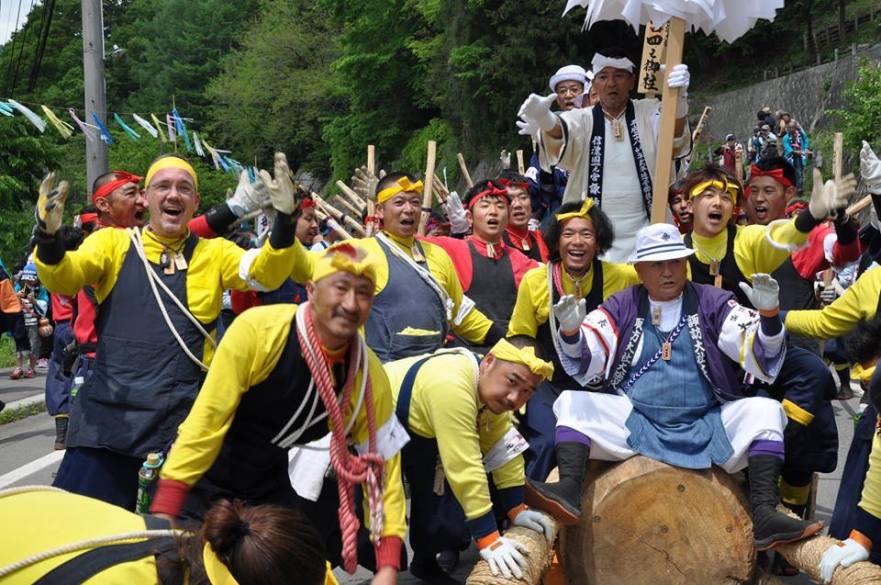 Once there, one by one they raise the hashira at the four corners of the shrine grounds in an exuberant celebration known as Tateonbashira.  This is the climax and final part of Onbashira proper.

The rather underwhelming final ceremony of Onbashira dedicates the newly rebuilt treasure house at each of the shrines. Back in the day, it’s said the entire shrine was reconstructed every six years at Onbashira time.